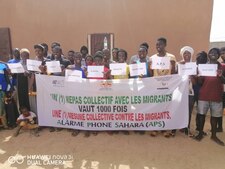 Since the migrants in Agadez usually live together with other people of the same origin, 30 people from one of these communities are invited for each kitchen. In addition to the expenses for the purchase of food, transport costs are incurred, because most of them live in migrant quarters, so-called ghettos, far away from the city centre.
The initiative of this collective kitchen is very popular among the different communities.
It is an expression of hope and solidarity for these people when they are occasionally served a rich and tasty meal and drinks, as it is usually impossible for them to eat enough.
For the APS team Agadez, the kitchen is an important element to get in touch with the migrants, which helps to build up a relationship of trust and information to raise awareness of their rights and opportunities as migrants.
Furthermore, the collective kitchen helps to strengthen self-organisation and mutual solidarity within the different migrant communities.

Migrants and refugees stranded in Niger
For years, Niger has been a transit country for a large number of migrants and refugees who cross the Saharan countries to the north. The city of Agadez is still the starting point for many convoys travelling through the desert to Algeria and Libya, although there are more and more secret migration routes away from cities, also due to the increased criminalisation of the transport of migrants. The EU, which has externalised its border regime on African soil, is investing billions of euros in African transit countries such as Niger to stop migrants on their way and force them to return to their countries of origin. And the northern bordering country Algeria has been carrying out mass deportations to Assamaka on Niger's border for years, mostly of West African citizens. Also, from Libya migrants and asylum seekers come to Agadez after they have fled Libya again because of torture and imprisonment.
The corona crisis considerably aggravates this already very difficult situation. Faced with the Covid-19 crisis, many of these migrants and refugees, who can neither go forward on their journey nor return to their countries of origin, now find themselves stranded in Niger. And so many thousands of people are trapped in extremely severe conditions in Niger and increasingly in Agadez. Even for Nigerien citizens, the state does not provide adequate public infrastructure, medical care and services, and even less for refugees and migrants.
The international intergovernmental structures, in particular the United Nations High Commissioner for Refugees (UNHCR) and the International Organisation for Migration (IOM), are also failing to assume their responsibility for ensuring decent living conditions for these people. Life is even more precarious for those who live outside the official camp structures, scattered and far away, as already mentioned, in so-called ghettos.

Together for freedom of movement and equal rights,
together for a world of solidarity for all!

Posted on Dec 26 | Tagged APS, Collective Kitchen, Covid-19, solidarity, and migrants | visited: 1995
Posts
Latest news Analyses & statements Activities of APS
Latest posts
2022-12-04 Niger end 2022: Humanitarian emergency in the face of mass deportations and inaccessibility to IOM services (News) 2022-10-21 October 2022: Deportations from Algeria to Niger continue - assistance to deportees by Alarme Phone Sahara's tricycle (Activity, News) 2022-09-19 More mass deportations from Algeria to Niger in August and September 2022 (News) 2022-09-19 "It's too hard, we want to go back": Senegalese in Niger denounce the difficult wait for their repatriation (Statements, News) 2022-09-22 Niger: Senegalese migrants take to the streets to march from Agadez to Niamey and demand their return to Senegal (News) 2022-08-28 Niger: Protests of migrants in IOM camps in Agadez and Arlit (News) 2022-08-27 IOM in Niger: Criticism of serious shortcomings in the care of people stranded in Niger (News, Statements)