An article in French on the evacuation of refugees from Libya to Niger on Niamey.com: 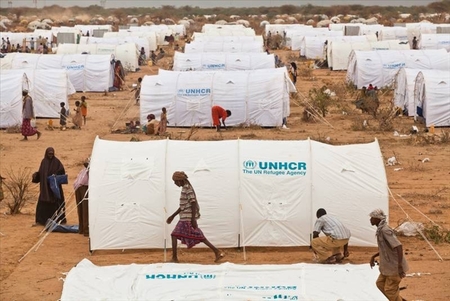 As the recent demonstrations of Sudanese refugees in Agadez and Niamey have shown, evacuation to Niger is not a satisfactory solution for refugees seeking a safe life.

The misery and suffering of refugees who are imprisoned, tortured, raped and sometimes even murdered in Libya are a direct consequence of the border regime of European states.

And these same European states now seek to get rid of their responsibility for the lives of refugees by leaving them in Niger, where even the majority of Niger's citizens live in total precariousness.

Posted on Jul 28 | Tagged réfugie-e-s, UNHCR, HCR, refugees, and Niger | visited: 4862
Posts
Latest news Analyses & statements Activities of APS
Latest posts
2022-12-04 Niger end 2022: Humanitarian emergency in the face of mass deportations and inaccessibility to IOM services (News) 2022-10-21 October 2022: Deportations from Algeria to Niger continue - assistance to deportees by Alarme Phone Sahara's tricycle (Activity, News) 2022-09-19 More mass deportations from Algeria to Niger in August and September 2022 (News) 2022-09-19 "It's too hard, we want to go back": Senegalese in Niger denounce the difficult wait for their repatriation (Statements, News) 2022-09-22 Niger: Senegalese migrants take to the streets to march from Agadez to Niamey and demand their return to Senegal (News) 2022-08-28 Niger: Protests of migrants in IOM camps in Agadez and Arlit (News) 2022-08-27 IOM in Niger: Criticism of serious shortcomings in the care of people stranded in Niger (News, Statements)