Article on "Info Migrants" on Senegalese Migrant's protest in Agadez on 19th of September against the way the IOM handled their so-called "voluntary return", letting them wait for months under precarious conditions and repeatedly delaying their departure: 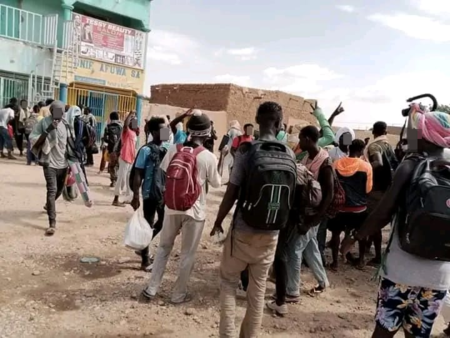 From the point of view of Alarme Phone Sahara, it can be added: Keeping people blocked under precarious and bad conditions until they see no other option for themselves but going back to their home countries is another brick in the wall of a repressive externalised border regime that has been set up in African countries under influence and pressure and with extensive funding from Europe.

Nevertheless, Alarme Phone Sahara (APS) stands in solidarity with the protests of migrants and refugees in the IOM and UNHCR camps and with their legitimate concerns.

Alarme Phone Sahara calls on IOM and its donors

Alarme Phone Sahara also calls on African states, especially ECOWAS members, to take steps to seek solutions for all people stranded on migration routes and defend their right to live in dignity and their right to free movement, instead of following the directives imposed by the outsourcing of European borders!

Posted on Sep 30 | Tagged IOM, OIM, Agadez, protest, proteste, migrant.e.s, and migrants | visited: 745
Posts
Latest news Analyses & statements Activities of APS
Latest posts
2022-12-04 Niger end 2022: Humanitarian emergency in the face of mass deportations and inaccessibility to IOM services (News) 2022-10-21 October 2022: Deportations from Algeria to Niger continue - assistance to deportees by Alarme Phone Sahara's tricycle (Activity, News) 2022-09-19 More mass deportations from Algeria to Niger in August and September 2022 (News) 2022-09-19 "It's too hard, we want to go back": Senegalese in Niger denounce the difficult wait for their repatriation (Statements, News) 2022-09-22 Niger: Senegalese migrants take to the streets to march from Agadez to Niamey and demand their return to Senegal (News) 2022-08-28 Niger: Protests of migrants in IOM camps in Agadez and Arlit (News) 2022-08-27 IOM in Niger: Criticism of serious shortcomings in the care of people stranded in Niger (News, Statements)