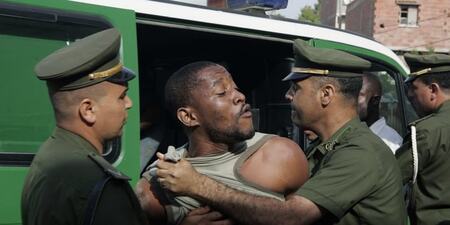 Alarme Phone Sahara strongly condemns the ongoing violent mass deportation convoys from Algeria to Niger, the raids and persecution against migrants from mostly Sub-Saharan African countries in Niger and the systematic human rights violations connected to these deportation policies!

We remind one more time that according to the "Association Agir Ensemble pour lutter Contre l'Immigration Clandestine (AAECC)" (Association Acting Together to Fight Clandestine Migration) from Algeria, 60 people were killed in a bus accident during a deportation convoy that had left Algiers on 12th of March 2021. Up till now, no clarification concerning this shocking news has taken place from the side of Algerian authorities.

According to the whistleblowers of Alarme Phone Sahara, a "non-official" deportation convoy with at least 384 migrants from various countries, among them three women, arrived in the border area between Algeria and Niger near Assamaka on 28th of March. On these "non-official" deportation convoys, people are deported and left in the border area between Algeria and Niger in the middle of the desert and forced to walk 15 to 20 kilometers to the border post of Assamaka. The biggest group on this deportation convoy were 221 people from Mali, besides them 23 people from Ivory Coast, 25 from Sierra Leone, 34 from Burkina Faso, 16 from Nigeria, 13 from Cameroon, 5 from The Gambia, 10 from Senegal, 5 from Sudan, 16 from Benin, 8 from Yemen, three from Liberia, two from Guinea Conakry, two from Togo and one person from Ghana.

Two days later, on 30th of March, another "official" deportation convoy from Algeria with 901 people arrived at Assamaka. Most of them were Nigeriens, among them 55 minor girls, 70 minor boys, 45 women and 731 men. In addition to them, 7 people from Sudan and one person from Nigeria were deported on this "official" convoy. One more time, the high number of minors among them shows the disregard of children's rights by Algerian security forces. According to Human Rights Watch, migrant children in Algeria had already been separated from their families and deported alone in previous deportation operations in October 2020.

In view of the inhumane and racist deportation policies of the Algerian state:

Posted on Apr 11 | Tagged deportation, expulsion, pushback, refoulement, Assamaka, algeria, algérie, and Niger | visited: 5474
Posts
Latest news Analyses & statements Activities of APS
Latest posts
2022-12-04 Niger end 2022: Humanitarian emergency in the face of mass deportations and inaccessibility to IOM services (News) 2022-10-21 October 2022: Deportations from Algeria to Niger continue - assistance to deportees by Alarme Phone Sahara's tricycle (Activity, News) 2022-09-19 More mass deportations from Algeria to Niger in August and September 2022 (News) 2022-09-19 "It's too hard, we want to go back": Senegalese in Niger denounce the difficult wait for their repatriation (Statements, News) 2022-09-22 Niger: Senegalese migrants take to the streets to march from Agadez to Niamey and demand their return to Senegal (News) 2022-08-28 Niger: Protests of migrants in IOM camps in Agadez and Arlit (News) 2022-08-27 IOM in Niger: Criticism of serious shortcomings in the care of people stranded in Niger (News, Statements)