Deportation convoys from October 2019 to January 2020

For the months of October 2019 to January 2020, Alarme Phone Sahara activists in the region of Agadez in Niger witnessed a continuation of large-scale deportations of citizens of different nationalities from Algeria to Niger. 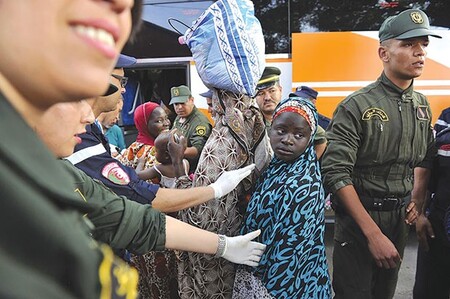 According to reports collected by Aziz Chehou, coordinator of Alarme Phone Sahara (APS) based in Agadez, and François Ibrahim, APS alert launcher currently based in Assamaka, the deportation of 4722 people across the border in Assamaka was confirmed for the days between 26th of October 2019 and 29th of January 2020.

Among those affected, a majority of at least 2582 people are citizens of Niger.

Most of the people deported were men, but in all the convoys there were also women and often also minors, girls as well as boys.

As in the past months, by far the largest groups of non-Nigerien deportees were citizens of Mali and Guinea Conakry. There were also nationals from other countries in the sub-region, including The Gambia, Burkina Faso, Benin, Nigeria, Sierra Leone, Ivory Coast and Senegal, from Central African countries, especially Cameroon, and even some people from Sudan, Somalia, Bangladesh and Syria. 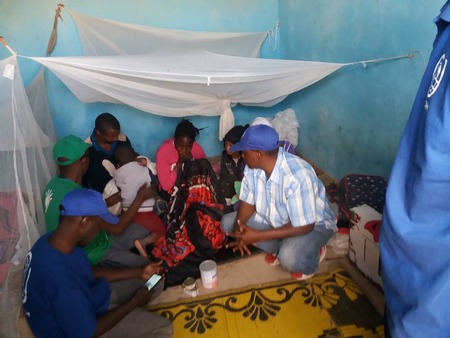 Persons who were deported at Assamaka with IOM staff

There are two types of deportation convoys from Algeria to Niger: on the one hand, those transporting exclusively citizens of Niger who will be directly handed over to the Nigerien security forces at the Assamaka border post. These convoys are directly coordinated with the Niger authorities based on the bilateral agreement between Niger and Algeria.

The other convoys transporting citizens of various origins drop people off in the border area near Assamaka and leave them in the desert to walk the last 15 to 20 kilometres on foot, already weakened, risking collapse or loss. According to Alarme Phone Sahara's research, IOM in cooperation with Doctors Without Borders (MSF) and the Nigerien security forces are looking for deportee people where they have been abandoned, but there is still a risk that people may get lost in the desert area.

According to reports from Algeria, the Algerian Ministry of Foreign Affairs signed a new instruction for the "repatriation of migrants residing illegally on the national territory and those involved in begging networks" on 12th of January 2020. It is therefore to be feared that the hunting of migrants, which has been a practice in Algeria for several years, will even be intensified. According to these reports, it is announced that deportation convoys will leave from the different administrative districts of Algeria to Tamanrasset in the south of the country, from where people will be deported to the different countries of origin - for many of them, it will be through the desert area in Assamaka.

Deportations from Algeria in their international context

The institutional base for all mass expulsions from Algeria to Niger is the bilateral agreement since 2014. The victims of this collaboration are, on the one hand, the citizens of Niger who have been migrating to the neighbouring country for a long time, often seasonally, in search of work and sources of income. On the other hand, those targeted are nationals of various African countries who have been increasingly stranded in Algeria in recent years. The reasons for this are the war and the hunt for migrants in Libya, the closure of the Moroccan border and in general all the practices that seek to block migration routes to Europe. The Algerian state, on the one hand, pursues its own interest to show a tough policy against refugees and migrants and to satisfy racism within its society. At the same time, it also seeks to position itself as a reliable partner for the border regime of the states of the European Union. With them, it does not have an official migration control agreement, but still receives large quantities of military and security equipment, such as surveillance technology or vehicles from the German car manufacturer Mercedes-Benz.

No to the continuing drama of deportations from Algeria to Niger

It's obvious: With the deportations from Algeria to Niger, there is a continuing drama of violations of the human rights of migrants and refugees. A drama that causes death, injury and trauma. A drama that is encouraged and orchestrated by the European policy that seeks to externalize its border regime throughout the Sahel-Saharan region.

Alarme Phone Sahara calls on the civil societies of the countries involved and concerned to resist deportations and pushbacks and to defend the lives, rights and freedom of movement of migrants and refugees.

Alarme Phone Sahara also calls on the governments and parliaments of all countries concerned, such as Mali and Guinea, to come to the aid of their citizens and speak out against the mass deportations from Algeria to Niger.

Figures on deportation convoys from Algeria to Niger through Assamaka between 26th of October 2019 and 29th of January 2020 according to Alarme Phone Sahara's alert launchers:

Arrival of an official convoy on 05th of November 2019

All the people deported left Assamaka to go to Arlit.

Liberia 2, including one woman

Democratic Republic of Congo 1 person, she is female

Ghana 1 person, she is female

Côte d'Ivoire 23 including 2 women and one minor boy

Plus 20 people from other countries:

Arrival on 14th of December

Guinea Conakry 101, including one woman

Ivory Coast 34, including one woman

Cameroon 15, including 4 women and 1 minor boy

Arrival of an official convoy on 29th of January 2020

446 persons deported, all Nigeriens coming from Algeria, including 18 women, 17 underage girls, 35 underage boys and 376 men. Among the deportees, there was one handicapped woman in a wheelchair and her 5 children, including 3 three-month-old triplet babies. The family, accompanied by her husband, was visited by the humanitarian aid workers present in Assamaka.

Posted on Feb 01 | Tagged Assamaka, Niger, algérie, algeria, refoulement, pushback, deportation, and expulsions | visited: 8690
Posts
Latest news Analyses & statements Activities of APS
Latest posts
2022-06-22 Issouf Garba - a story of a migrant and the solidarity of Alarme Phone Sahara (Activity) 2022-05-22 21 MAY: TRANSNATIONAL DAY OF STRUGGLE AGAINST DEPORTATIONS (Statements) 2022-05-15 Report of the Alarme Phone Sahara mission to Dirkou, Bilma, Latai and Siguidine (Activity) 2022-04-12 Time to listen to Refugees in Libya! (Activity) 2022-03-22 March 2022: Arrival of further deportation convoys. Precarious situation in Assamaka and in the cities of Niger (News) 2022-03-10 January to March 2022: Mass deportations from Algeria and Libya to Niger (News) 2022-03-01 Body of a dead driver found in the desert in the Dirkou area, northern Niger (News)