On 7th of October 2021, refugees and migrants in Libya published an urgent letter to the African Union. After the latest wave of brutal raids against migrants and refugees in Tripoli. people started a protest in front of the Tripoli UNHCR office. According to refugees in Libya, 6 persons were murdered by detention guards. In a press statement from 6th of October 2021, the International Rescue Committee also reported that more than 5000 migrants and refugees have been arrested within less than one week and calls for their immediate release.

You can follow the twitter account of REFUGEES IN LIBYA. They also call to retweet @RefugeesinLibya and tag @AUC_MoussaFaki, a responsible person at the African Union authorities. 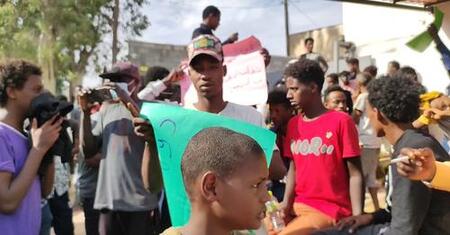 Urgent letter by Refugees In Libya to the African Union

A COMPLAINT RAISED AGAINST THE AFRICAN UNION (AU) OVER THEIR PRETENCE ON THE CHAOS HAPPENING IN LIBYA FOR YEARS:

This letter is coming from group of refugees and migrants who are currently stuck in Libya and have been stuck here for years, enduring all sorts of violations, torture, extortion, forced conscription, arbitrary arrest and detention and unlawful killings. We are so moved and saddened to observe the silence of the African Union for the past 10 years over the killings and grave violations against migrants and refugees living in the  Libyan lands.

We are the citizens of this continent and these soils that we travel through, we demand to travel to all African countries freely without obstructions. No African child should be called a migrant in the African Union and member states, we need peace, security, education and infrastructure. The African Union and member states have  legal obligations to ensure that we meet these expectations . And not to risk our lives to venture Europe and other journeys  en-routes where thousands of lives might perish.

And the dreams die without seeing the light.

Amongst these people were children who had  dreams to become doctors , teachers, entrepreneurs, astronauts and pilots. They had bigger dreams that were buried with them in the vast Sahara, and those who sank deep into the depths of the Mediterranean sea under the watch of the African Union.

The African Union has achieved nothing yet since it’s formation in Sirte, on the 9 September 1999, but corruption and failing the dreams of African people by leaders and heads of the states. They have delivered nothing to the people whom  they are supposed to serve in fairness.

The African Union and its  member states have the power and resources to feed and educate its citizens, but all they long for is war against  their own people, and corruption leading to their own self growth and the greediness of staying in power for decades.

The African Union has failed to acknowledge that the massive in-flow of migrants to Libya, then Europe, is arising because of  their failures to address African problems. Youth had consequently lacked opportunities  to explore and develop themselves, educate themselves and nourish themselves.

The ECOWAS has failed the West African states and the sub-sahara states at large under the presence of the African Union, forcing populations  to flee to Europe en route where their lives are risked. where they are killed like flies and the perpetrators go free without being held accountable for those  crimes that may amount to crimes against humanity.  The African Union has also failed to combat  terrorism of Boko Haram in the west African states, forcing millions to flee their homes, states and countries to places where they are unable to feed themselves and educate their children.

The African Union has failed to address and bring an end to the war in the youngest Nation in the world, South Sudan. They and the IGAD have messed with the lives of million South Sudanese by helding nonsensical peace talks in Addis Ababa for years that yields no fruits, and does not match their needs on the ground and in reality, forcing millions to flee to all neighboring countries, and take down most perilous journeys to Europe.

The African Union has failed to bring peace to the people of Congo and Uganda, while the Lord's Resistance army (LRA) erupted, who later massacred millions across East and central Africa, in countries namely Ugandan, Congo, South Sudan, Central Africa Republic. Destroying resources worth billions of money, destroying the continent and its citizens.

The African Union has failed to address the Tigrinya genocide in Ethiopia led by Ahmed Abiy. Millions have been forced to  flee to the neighboring Sudan, where they embark on the journey full of uncertainties to Libya, in search of income and protection across Europe. But they end up in the hands of the Libyan authorities, militias and traffickers.

The African Union failed to react to the massacre which happened in Sabratha 2017 , against African migrants in Libya. Thanks to the people of Niger who gave a space to host the victims and the later offer of Rwanda.

They (AU)  also failed to react to the Tajoura airstrike that murdered hundreds of refugees and migrants by the Russian drones on  African soil.  And they pretend that they don't know about the vast forced conscription that happened in Libya from the period of 2019-2021,  of migrants intercepted at sea. They never asked where the thousands of migrants who disappeared from the Libyan official detentions.

Eventually, the brutal crackdowns on Gargaresh, which was mainly inhabited  by thousands of migrants, refugees and asylum seekers, have not caught their attention. These people are humans, their lives matter, and the African Union is obliged to ensure that the Libya authorities do not harm any migrant or refugee in African soils.

We call upon the African Union and its  member states to come to our aid, to call on the Libyan government to comply with international  laws applicable in Africa and bring perpetrators to justice. Including safe passage and  humanitarian evacuation flights out of Libya are in effect.

We call upon the African Union and member states to protect our fundamental rights, including the right to life, freedom of movement, and protection.

Once again we reiterate our calls for an immediate evacuation of refugees and migrants who are strongly affected by the latest development of brutality in Tripoli and across Libya at large. And those found guilty have to be brought to justice.

® All Rights reserved Refugees and migrants in Libya 2021 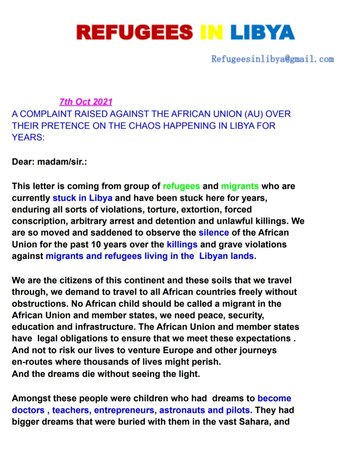 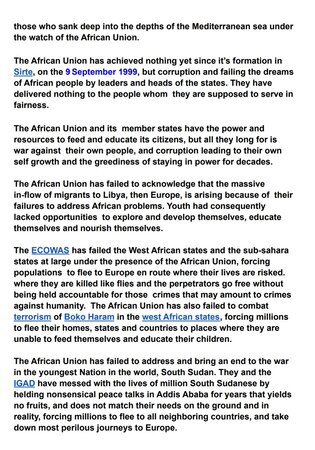 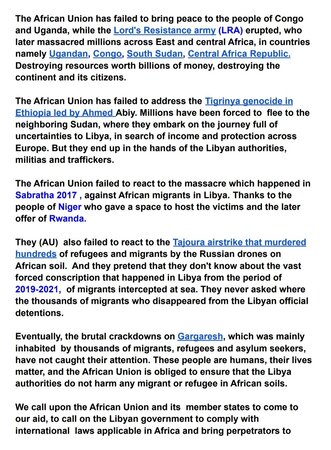 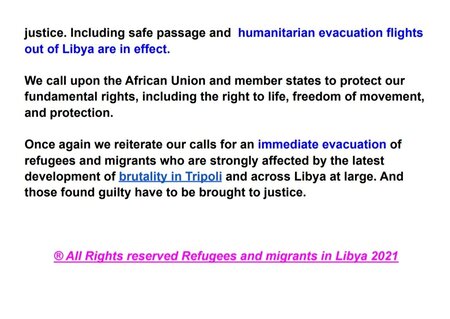 Alarme Phone Sahara (APS) fully supports the complaints and demands to the African Union published by refugees in Libya. We also have to point out that the crimes against the Human Rights and the lives of migrants and refugees happening in Libya are also a consequence of the repressive migration policies set up by European Union states. For years, the EU members have been paying billions of Euro to Libyan authorities and militia to detain people in prisons and detention centres and to prevent them from making their way to Europe. Under the eyes of Frontex, the so-called Libyan coastguard intercepts migrant and refugee boats in the Mediterranean and illegally brings people back to Libya by force.

In solidarity with Refugees in Libya, Alarme Phone Sahara demands from the African Union and its member states:

Alarme Phone Sahara also calls on the UNHCR to do everything in its power to facilitate the immediate evacuation of migrants and refugees from Libya!

We also demand from the European Union and its member states:

Posted on Oct 15 | visited: 3230
Posts
Latest news Analyses & statements Activities of APS
Latest posts
2022-10-21 October 2022: Deportations from Algeria to Niger continue - assistance to deportees by Alarme Phone Sahara's tricycle (Activity, News) 2022-09-19 More mass deportations from Algeria to Niger in August and September 2022 (News) 2022-09-19 "It's too hard, we want to go back": Senegalese in Niger denounce the difficult wait for their repatriation (News, Statements) 2022-09-22 Niger: Senegalese migrants take to the streets to march from Agadez to Niamey and demand their return to Senegal (News) 2022-08-28 Niger: Protests of migrants in IOM camps in Agadez and Arlit (News) 2022-08-27 IOM in Niger: Criticism of serious shortcomings in the care of people stranded in Niger (Statements, News) 2022-08-23 Solidarity video for Sierra Leonean refugee protest camp in Munich (Statements, Activity)