Report by TAHER, a whistle blower of Alarme Phone Sahara from Bilma 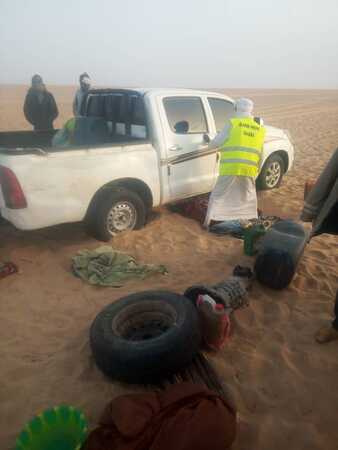 According to the present law, citizens of Niger, compared to foreign citizens, have the right to move freely within the whole national territory - so it is not forbidden for them to travel up to the Libyan border.

Somehow, certain drivers in the desert of Niger are persently affraid of picking up people in distress because of the law 36-2015 that criminalises, among other things, transporting migrants. Moreover, on the routes of the Ténéré desert, it often takes several days until another convoy of vehicules who could help might come along

In the concrete case, the members of Alarme Phone Sahara were able to rescue the persons in distress with the support of members of Niger military and gendarmerie who, in spite of their official task to fight against so-called irregular migration, were ready to help without preventing the travelers from continuing their journey.

Moreover, the Alarme Phone Sahara team was able to help a second group of persons who had a breakdown during their return from Libya to Niger.

Here is the report by APS whistle blower TAHER from Bilma:

My name is TAHER, (APS BILMA). On Thursday, March 14 2019, we went out in the convoy from Agadez, it was 180 km from the "well of hope" that we found a double cabins vehicle that had been stuck for three (03) days and that was carrying 25 migrants. It had a breakdown in the gearbox, the migrants on board were hungry for water and food during these three (03) days.

Since we had APS tools with us, the opportunity was therefore to take the situation in hand, so we went to the "well of hope" and we found on the spot the military and their escort chief, the secretary general of the prefecture of BILMA, the commanders of water and forest affairs, the national gendarmerie. We explained them the vision of APS and its responsibility for people in distress, which was applauded and approved by all!!! They all agreed to help these migrants, they accompanied us. Among the travelers, one gave 60 liters of diesel to support the mission of APS, a driver coming from Libya lent us his vehicle to rescue these migrants. Arriving at the scene, the vehicle was repaired and the travelers resumed their way to DIRKOU, having received something to drink and food, as well as other support.

On the way back, we met another vehicle coming from Libya and having a radiator problem. As we were passing by the "well of hope" on our way back, we carried the 06 migrants migrants and the driver with us, then we dropped them there while waiting for their vehicle to be repaired to go to Agadez.

This is the activity that APS has been able to carry out in the field. It should be noted that the administrative and customary authorities, the population and the entire region of Agadez have appreciated this new initiative which helps to save lives in various ways. The question was whether it should continue and the answer was "yes".

Moreover, at the level of BILMA, the Alarme Phone Sahara number has already been distributed among the associations in place and to the driver-carriers. The volunteers are demonstrating their craze for moving forward with the APS vision.

The grievance remains on the difficulty of our capacity to move. We wish to have an APS vehicle at our disposal to enable us to carry out our activities. It is necessary to carry out help in different zones, having at the same time focal points to distribute the information to the source whenever it's necessary and in coordination with the APS office in Agadez. We note that it is a collective work. The steps has been done, APS exists in several countries. Now it is the opportunity to ring the Alarm for a mutual and prosperous fight."

Posted on Apr 03 | Tagged sauvetage and rescue | visited: 3487
Posts
Latest news Analyses & statements Activities of APS
Latest posts
2022-05-22 21 MAY: TRANSNATIONAL DAY OF STRUGGLE AGAINST DEPORTATIONS (Statements) 2022-05-15 Report of the Alarme Phone Sahara mission to Dirkou, Bilma, Latai and Siguidine (Activity) 2022-04-12 Time to listen to Refugees in Libya! (Activity) 2022-03-22 March 2022: Arrival of further deportation convoys. Precarious situation in Assamaka and in the cities of Niger (News) 2022-03-10 January to March 2022: Mass deportations from Algeria and Libya to Niger (News) 2022-03-01 Body of a dead driver found in the desert in the Dirkou area, northern Niger (News) 2022-01-23 The Collective Kitchen of Alarme Phone Sahara in Agadez (Activity)