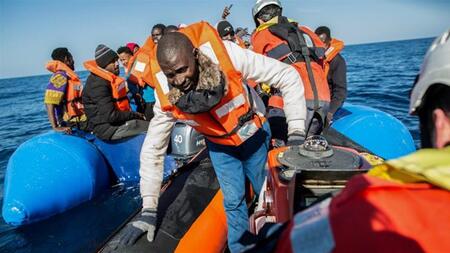 "As many as 30 refugees and migrants, including minors, are believed to have been brought to an underground cell and allegedly tortured in Libya for breaking out and holding a protest earlier this week.

An estimated 150 male detainees escaped on Tuesday from the main cell in Tripoli's Triq al Sikka detention centre, where some of them have been held for more than a year, to lodge their protest with Libya's Department of Combatting Illegal Migration (DCIM).

They protested against the conditions under which they have been detained, and demanded a visit from an official from the United Nations Refugee Agency (UNHCR), according to witnesses. (...)"

Posted on Mar 07 | visited: 2540
Posts
Latest news Analyses & statements Activities of APS
Latest posts
2022-10-21 October 2022: Deportations from Algeria to Niger continue - assistance to deportees by Alarme Phone Sahara's tricycle (Activity, News) 2022-09-19 More mass deportations from Algeria to Niger in August and September 2022 (News) 2022-09-19 "It's too hard, we want to go back": Senegalese in Niger denounce the difficult wait for their repatriation (News, Statements) 2022-09-22 Niger: Senegalese migrants take to the streets to march from Agadez to Niamey and demand their return to Senegal (News) 2022-08-28 Niger: Protests of migrants in IOM camps in Agadez and Arlit (News) 2022-08-27 IOM in Niger: Criticism of serious shortcomings in the care of people stranded in Niger (Statements, News) 2022-08-23 Solidarity video for Sierra Leonean refugee protest camp in Munich (Statements, Activity)