On 21st of May 2021, the transnational network "Afrique Europe Interact" and Alarme Phone Sahara, together with different partner groups, celebrated the transnational day of action "FREEDOM OF MOVEMENT INSTEAD OF DEPORTATIONS!" to demonstrate against deportations from Europe to African countries, but also deportations between African countries, encouraged by readmission agreements and by the externalisation of the EU border regime. The result was an impressive diversity of actions and activities in 6 countries: Kindia in Guinea, Bamako in Mali, Agadez in Niger, Sokodé in Togo, Mbanza Ngungu in Congo (DRC) and Berlin in Germany.


21st of May in Agadez, Niger: Migrants' night with talent show and condemnation of deportations to Niger

In Agadez, the coordination of Alarme Phone Sahara organised a "migrants' night" where migrant artists presented their talents and thus called for human dignity, against dehumanisation and against deportations from Algeria and all deportations.

The participants presented a wide range of artistic, craft, culinary and sporting talents: Caterers presented their food, musicians performed, cosmeticians and hairdressers showed their make-up and hairstyles, a karate group showed a choreography and others contributions were presented.

Concert and statement at migrants' night:

A consequence of this evening should be: Freedom and justice for all migrants so that they can develop their talents and skills and build a happy and dignified life - without being mistreated and persecuted by an inhuman and unjust system of deportations, social exclusion, closed borders and blocked roads.

The reading of the declaration of the Alarme Phone Sahara coordination for the transnational day of action of 21 May 2021 for freedom of movement and against deportations in Agadez. In this statement, Alarme Phone Sahara raises its voice against political leaders from the south and the north regarding the externalisation of the European Union's borders:


21st of May in Bamako, Mali: 6 days of workshops and awareness raising

Malian activists from Alarme Phone Sahara and Afrique-Europe Interact stood in solidarity with Malian diasporas and other migrant communities against deportations and human rights violations on migration routes. 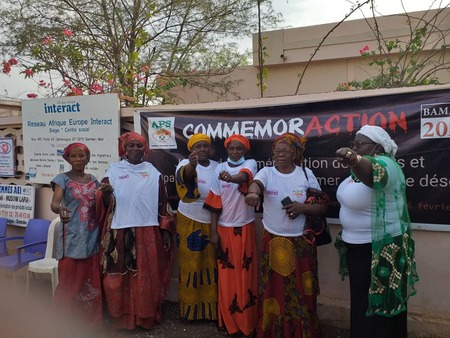 From 16th to 21st of May, a number of activities were organised around the headquarters of the Malian section of Afrique-Europe Interact and Alarme Phone Sahara in Bamako's Djelibougou neighbourhood.

The activities started on 16th of May with an awareness raising and mobilisation at the end of a football tournament in a public field in the neighbourhood. From 17th to 21st of May, there were workshops each day for 20 to 30 people on different socio-political themes impacted by migration and the current global crises. Through these workshops, the participants developed the activity for 21st of May: A sketch by a group of young people showing the police persecution that migrants undergo on their way and also testimonies of people deported from Germany and another one who was successively deported from Spain and Algeria after racist exactions of migrants.

Presenting the declaration of Alarme Phone Sahara and Afrique-Europe Interact:

Dancing at the day of action:


21st of May in Kindia, Guinea: Citizens' day of solidarity with the deported

The Faso Kele collective, together with the group "Action des Jeunes Pour le Développement Durable" (Youth Action For Sustainable Development) and the Afrique Europe Interact (AEI) network organised a citizens' day of solidarity with the deportees on Friday, 21st of May 2021, at the Espace Bérédé located in Damakania near the Samoréya camp in the Kindia prefecture. 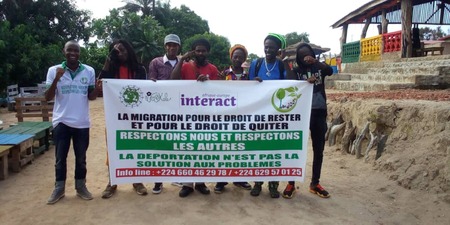 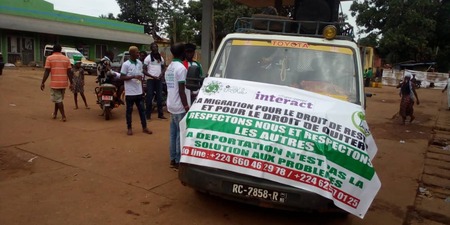 At the opening ceremony, there were speeches by Bah Bhoundoukoura, Gbassicolo, Minko, and Aïssata Tiguidanke Bangoura, activists of Faso Kele and AEI. Afterwards there were other speeches, projections and the presentation of a theatre on the history of the assassination of Oury Jalloh in Dessau, Germany. Video of the event by Guinée Matin

Before all this, the activists of Faso Kele and AEI organised an awareness and mobilisation tour by minibus in the surrounding communities:


21st of May 2021 in Sokodé, Togo: Awareness raising in conference debate and radio broadcast

The transnational day of action for freedom of movement and against deportations on 21st of May 2021 was also celebrated in Sokodé, Togo, in collaboration with civil society organisations, notably the Togolese Association of Deportees (ATE TOGO), the MON AVENIR association of young people from the Kpangalam neighbourhood and the Association of Women's Groups in Sokodé. 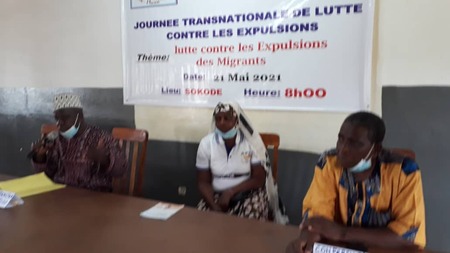 The programme included a conference-debate, a radio programme on Radio Tchaoudjo, synchronised with other local radios, and educational talks, aimed at raising awareness in Togolese public for the problem of deportations and pushbacks of migrants to Togo and seeking solutions to end this scourge.

STATEMENT BY THE TOGOLESE ASSOCIATION OF DEPORTEES (ATE):

"On Friday 21st of May 2021, the Togolese Association of Deportees (ATE-TOGO) organised a conference-debate on the theme: "Why the deportation of migrants and what are the solutions to put an end to this scourge" at the CENATIS centre in Sokode.

Indeed, Sokode is one of the main Togolese cities of transit and departure of migrants and counts among its current population many young migrants deported from Libya, Algeria, Morocco, Lebanon, Saudi Arabia, Kuwait and various countries of West and Central Africa to TOGO.

There were also former migrants who had been deported or turned back from Europe (Germany) and North America.

The conference was attended by young people and former migrants who had been deported, women in groups, and a number of residents of the town of Sokodé, with limited participation because of Covid-19.

The aim of this conference was to promote and protect the rights of migrants who have been deported or turned back and to speak up against racist and inhumane deportations and for the freedom of movement for all.

During the conference, victims of deportations testified about the inhumane treatment, arrests and confinement, and racist violence experienced throughout the process leading to their deportation.

The participants of the conference, following the testimonies and presentations heard, declare:

The need to put an end to deportations of so-called "irregular" migrants in order to save human lives.

-Solidarity with migrants who have been deported or turned back

The participants call for:

-Open the borders and allow freedom of movement for all

FREEDOM OF MOVEMENT FOR ALL!
SOLIDARITY WITH MIGRANTS!
STOP DEPORTATIONS!


21st of May in Mbanza Ngungu in the Democratic Republic of Congo (DRC): Participation in the "conference on changing mentalities"

On 21st of May there was a "conference on changing mentalities" involving different actors involved in the management of regional communities in Mbanza Ngungu, Democratic Republic of Congo. There, Victor Nzuzi, an activist from Afrique-Europe Interact, together with his comrades, led an hour dedicated to solidarity with Congolese refugees in Brazzaville and Angola. This was Mbanza Ngungu's contribution to the Transnational Day of Action "Freedom of Movement instead of Deportations" on 21st of May 2021, which was celebrated at the same time in Kindia in Guinea, Bamako in Mali, Sokodé in Togo, Agadez in Niger and Berlin in Germany.


21st of May in Berlin, Germany: Tour to the embassies of Niger, Tunisia and Algeria

In Berlin, Germany, Afrique-Europe Interact organised a tour to the embassies of Niger, Tunisia and Algeria with the help of the "Solibus" - a bus run by activists to facilitate protest actions. A highlight was when embassy staff arriving in their car were confronted with the anger of protesters against the migration control agreements signed between Niger and the European Union.

Finally, the ambassador with his diplomatic staff came out personally to receive the declaration of Alarme Phone Sahara and Afrique-Europe Interact. The activists stressed that the demonstration was not directed against Niger, but that the Nigerien state should protect its own citizens - including many minor children - who suffer from mass deportations from Algeria. 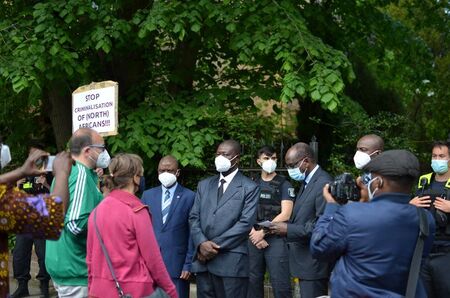 At the Tunisian embassy, Riadh Ben Ammar, activist and theatre artist, spoke about the harmful effects of the closure of the Mediterranean maritime space for Tunisian society:

The protesters also demanded that the embassy stop providing deportation documents for deportations to Tunisia - an urgent request given the regular charter deportations from Germany to Tunisia, the latest of which had just taken place from Leipzig airport.

Other speakers condemned the daily experiences with the deportation system and the racist police violence in Germany. On this occasion, the protest was also dedicated to the commemoration of Alpha Oumar Bah, who ended his life on 16th/17th of March 2021 out of fear of being deported to Guinea, and of Christy Schwundeck, who was shot by a German policewoman in a Jobcenter in Frankfurt 10 years ago on 19th of May 2011. At the end, the embassy welcomed Riadh Ben Ammar for a meeting, which he used to explain the need for open borders and solidarity with Tunisian migrants and all migrants, supported by the slogans and chants of the protesters.

At the Algerian embassy, the demand for an immediate halt to the mass deportations from Algeria to Mali and Niger was underlined. The protesters strongly condemned the human rights violations during the deportations to the border areas in the desert. According to Algerian sources, many people were killed in two bus accidents during deportation convoys in March 2021. Unlike the Niger and Tunisian embassies, the Algerian embassy representatives were not prepared to meet or talk directly with the protesters and had barricaded themselves behind police barriers. They only accepted the declaration with demands to the Algerian state through the doorway.

An important sign of solidarity with the Algerian activists affected by the state repression in Algeria was the presence of "Hirak Berlin". This group of Algerian activists in exile supports the cause of the mass movement for a popular revolution that has been taking place in Algeria since 2019 until now - at first against former president Bouteflika and later against the regime that remains in the hands of the military and the former elites. Their position was not even to seek any direct communication with the embassy to show the non-legitimacy of the current regime in Algeria. The demonstration ended with a small concert of "desert music against deportations", a group created by Nigerien musicians with their friends to bring the desert blues to the streets of Berlin:

Posted on Jun 02 | Tagged action, protest, proteste, migrants, migrant-e-s, expulsions, and deportations | visited: 2726
Posts
Latest news Analyses & statements Activities of APS
Latest posts
2022-12-04 Niger end 2022: Humanitarian emergency in the face of mass deportations and inaccessibility to IOM services (News) 2022-10-21 October 2022: Deportations from Algeria to Niger continue - assistance to deportees by Alarme Phone Sahara's tricycle (Activity, News) 2022-09-19 More mass deportations from Algeria to Niger in August and September 2022 (News) 2022-09-19 "It's too hard, we want to go back": Senegalese in Niger denounce the difficult wait for their repatriation (Statements, News) 2022-09-22 Niger: Senegalese migrants take to the streets to march from Agadez to Niamey and demand their return to Senegal (News) 2022-08-28 Niger: Protests of migrants in IOM camps in Agadez and Arlit (News) 2022-08-27 IOM in Niger: Criticism of serious shortcomings in the care of people stranded in Niger (News, Statements)