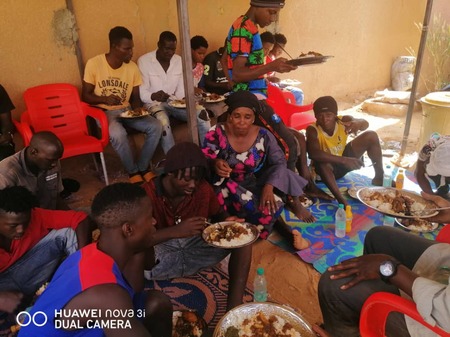 In the face of the Covid-19 crisis, migrants from various sub-Saharan African countries are currently stranded in Niger. Many of them end up in Niger after having been imprisoned and deported from Algeria and Libya, others have fled Libya because of the war and massive human rights violations. In recent years, billions of Euros have been invested in the Maghreb countries and Niger by European states to stop migrants and refugees from moving on and to force them to return to their countries of origin. In the time of the Corona pandemic, this policy of the border regime has become a trap for thousands of people who can neither advance on their journey nor return to their countries of origin any more. Niger itself is considered one of the most impoverished countries in the world. Adequate public infrastructure, medical care and services of general interest do not exist for the citizens of Niger, nor for all the migrants and refugees who are stranded on Niger's territory. The major international structures, notably the UNHCR and the IOM, which are themselves part of the policy of migration control, do not assume their responsibility to ensure dignified living conditions for the people currently living in their transit camps and refugee camps. But life is even more precarious for people living outside the official structures, scattered in migrant ghettos.

Faced with this situation, the Alarme Phone Sahara (APS) team in Agadez, Niger, has set up a Collective Kitchen project in collaboration with different migrant and refugee communities who live in this city on the edge of the Niger desert. On the one hand, the collective kitchen is a practical support for the daily needs of people struggling to survive in very precarious conditions. On the other hand, it helps to strengthen self-organisation and solidary mutual assistance within the different migrant communities. And for Alarme Phone Sahara, the Collective Kitchen also provides the possibility to improve the exchange and sharing of information with migrants.

Ba Amadou: "Today, the man is very happy, the man has also suffered a lot. The man has been to Algiers and to Oran. My name, first of all, is Ba Amadou. I'm Guinean, also proud to be Guinean, in spite of the hardship that has dominated us. Inch'Allah, one day it will be allright!"

One migrant from Guinea: "Congratulations to APS, the company of APS. Truly, thanks a lot. We are migrants. Migrants from the desert. Algeria, Morocco, Libya."

Alpha Diallo: "Cheers to APS, I'm Mohammad Alpha Diallo. Today we came to your court. But I'm very happy today because I've been well received. No, we have been well received anyway. I don't know how to describe it. That's it and APS is the "number one" here in Niger! Because since I took the road there, I haven't had anybody like them. Today I was very, very welcome. I've had everything, many things. Now I am happy for APS. Whoever sees this, he/she just has to come and assist the group. Wallahi, it's fine. I'm very happy. Thank you very much. Thank you very much." 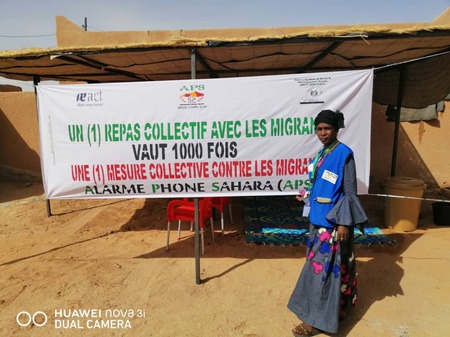 "On Saturday 4th of July 2020, the first Collective Kitchen was organised for migrants at the APS office in Agadez, Niger. It is the community of Guinea Conakry who had the honor of this first experience. More than thirty migrants including men, women and minor children responded to the call.

The ceremony was rich in lessons. This is the result of several days exchanges between network activists who wanted to innovate in the actions focussed on migrants in accordance with the guidelines set up by the transnational APS network. An organizing committee has been set up to conduct the activity.

For more than a month, the idea of assisting migrants stranded in Agadez as a result of the Corona virus pandemic has been debated several times. A general consensus has come out in favour of organising collective meals for migrants and prepared by themselves to show APS's solidarity with these people. The foremost aim is to allow these vulnerable people to know that there is at least one organization that cares about their living conditions because of the challenges they face on their riskful journey. In this sense, a certain number of actions have been selected. 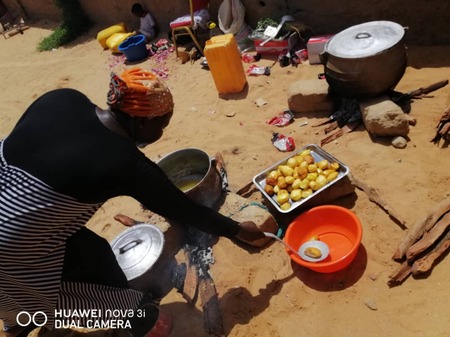 The organization of the Collective Kitchen days

On several occasions, migrants stranded in Agadez have requested the assistance of APS for health and food assistance. According to its limited possibilities, the structure has always listened attentively to the grievances submitted to it. To some of them, there have been internal responses. But for cases beyond its competence, the coordination has directed and accompanied migrants in need to more affluent organizations such as the International Rescue Committee, Médecins Sans Frontières and Médecins du Monde. In accordance with the procedures of these organisations, they provided answers to the requests of migrants. Some of the beneficiaries report on their achievements, while others never give feedback once their grievances have been met. In order to better structure its interventions, APS finally decided internally to act differently. 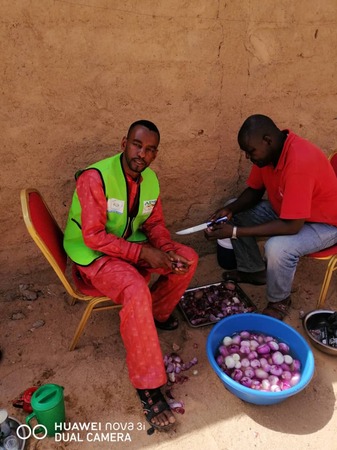 Before the day of the Collective Kitchen, it was agreed to define all the needs to be met to make the activity a success. The location chosen for the event was the APS coordination office, so equipment had to be found to make the guests more comfortable. This required the rental of sheds, chairs, tables, kitchen utensils (pots, ladles, graters, plates, trays, spoons, forks, basins, bowls, knives, etc.). As the cost of renting this equipment is quite high for a long period of time, the debates tilted in favour of purchases so that APS will keep its own material. Two banners (in French and English) are made for the visibility of the activity.

As for the food to be cooked, it is decided by mutual agreement with the representatives of the beneficiaries. Besides the costs for the food, the transportation costs for the people invited are also take care of, as they live in different places, most often located at the outskirts of the city to escape the repression of the defence and security forces. Purchases for kitchen needs are made with the representatives of the migrants accompanied by APS volunteers. It has been reported by the persons in charge that the value of the items varies due to border closures. Niger lives mainly from imports. 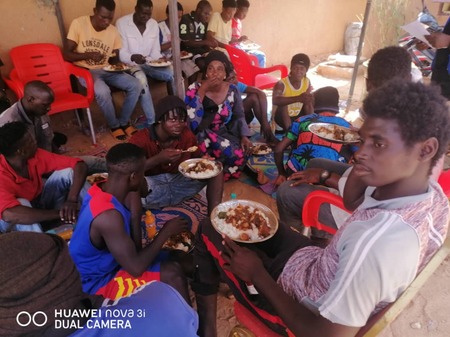 Early in the morning of Saturday 04th of July 2020, the women in charge of the kitchen and the APS volunteers went to the market for shopping. And the kitchen started with a slight delay. But between 1pm and 2pm, the dishes were served and the guests enjoyed the meal. They showed their gratitude to APS through videos. The beneficiaries returned to their homes after 4 p.m. local time. The committee then set about cleaning up the office yard.

Findings of the committee on the first collective kitchen

From the idea of the Collective Kitchen to its realisation, APS activists have made a number of comments : 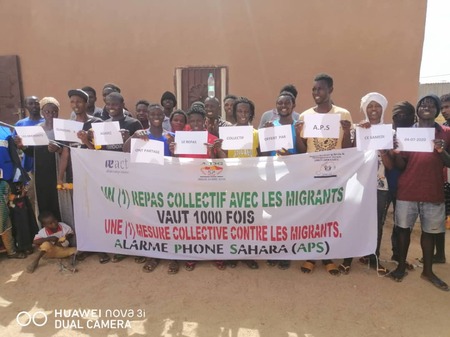 The first experience with the Collective Kitchen is useful in the sense that it allowed APS to measure its organizational capacity. This proves that in addition to the organization of the 6th of February commemoration, other factors are present for the visibility of APS in Niger and in the world. Future actions will certainly impact the future of APS in the national and international contexts.

For the organizing committee,