According to an article published in Aïr Info, on 4th of January 2020, people living in a UNHCR refugee camp in Agadez set fire to the accommodation facilities of the camp, a large part of which was destroyed by the flames. From the chronology of events, it is clear that this was not an act of pure vandalism. It somehow seems to be the last step in a process of struggle after weeks of protests by refugees in Agadez against an increasingly desperate situation in which their demands were met only with a strong repression by the police. 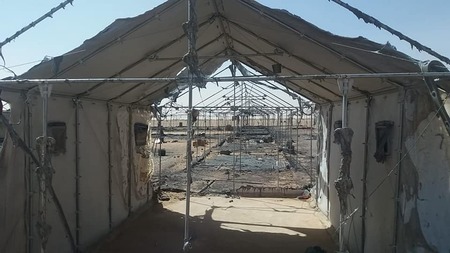 As a reminder, on 16th of December 2019, almost 1000 people, mostly Sudanese refugees, had left the camp and started a sit-in in front of the UNHCR headquarters. In addition to the precarious living conditions in the camp, the main reason for this mood swings was the fed up feeling of being stuck in Niger without any progress in their asylum procedure managed by the UNHCR and without any prospect of being welcomed by another country where they could live in dignity and security.

These are people who have survived war and persecution, including in the Darfur region of Sudan, in addition to imprisonment and other serious human rights violations perpetrated against migrants in Libya during their travels. Many of them were evacuated or have fled Libya, some of them since more than two years. And now they find themselves abandoned in a camp at the fringes of the desert.

The refugees had continued their peaceful sit-in until 4th of January, without UNHCR or the Nigerien authorities accelerating the process of finding urgent solutions to their concerns. Against all expectations, on 4th of January 2020, the regional and municipal authorities, accompanied by security forces, came to remove them from their sit-in location by forcibly embarking them on vehicles to bring them back to the camp.

It was only after this act of repression against their peaceful demonstration that the refugees would have had the reflex to set fire to the camp.

In the same vein, Alexandra Morelli, UNHCR representative in Niger, who was interviewed by journalist Anicet Karim for Aïr Info, spoke of an "act of vandalism that has no comment" and said she "felt betrayed" as "a mother who believed in her children". Would there have been a deal to talk about betrayal? In another public statement, she rejected any criticism of the living conditions of the refugees in the camp in Agadez and the management of the asylum procedures. On the other hand, she accused "a group of 200 to 300 people who put a lot of pressure to leave for Europe" for having "created a hostage situation".

However, one of the asylum seekers calling himself Athan told Aïr Info that: "the High Commission for Refugees (UNHCR) in Agadez is the only one responsible for what is happening to us in Agadez".

-That there is no reason to criminalize refugees in Agadez, to the point of taking criminal proceedings against them. On the other hand, APS believes that solutions must be sought that respond to the desperate situation of the people in the UNHCR camps in Niger.

-Instead of accusing and prosecuting people who are already in a vulnerable situation, it would be fairer to analyse the situation dispassionately and see to what extent the slowness of UNHCR in processing asylum applications and the complicit silence of the Nigerien authorities during weeks of peaceful protests by asylum seekers in Agadez and the forced evacuation of the sit-in on 4th of January 2020 caused the situation to deteriorate until the camp was burnt down.

Posted on Jan 08 | Tagged Agadez, refugees, réfugié-e-s, camp, asylum, asile, UNHCR, HCR, proteste, protest, repression, and répression | visited: 6694
Posts
Latest news Analyses & statements Activities of APS
Latest posts
2022-12-04 Niger end 2022: Humanitarian emergency in the face of mass deportations and inaccessibility to IOM services (News) 2022-10-21 October 2022: Deportations from Algeria to Niger continue - assistance to deportees by Alarme Phone Sahara's tricycle (Activity, News) 2022-09-19 More mass deportations from Algeria to Niger in August and September 2022 (News) 2022-09-19 "It's too hard, we want to go back": Senegalese in Niger denounce the difficult wait for their repatriation (Statements, News) 2022-09-22 Niger: Senegalese migrants take to the streets to march from Agadez to Niamey and demand their return to Senegal (News) 2022-08-28 Niger: Protests of migrants in IOM camps in Agadez and Arlit (News) 2022-08-27 IOM in Niger: Criticism of serious shortcomings in the care of people stranded in Niger (News, Statements)