According to the local newspaper « Aïr Infos », 4 or 5 persons died in a bus accident 60km from the town of Arlit in the Agadez region of Niger in the evening of 3rd of October 2019. More people who were heavily injured had to be brought to the hospital center of Arlit. 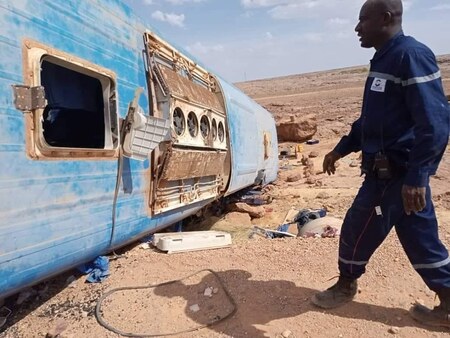 The bus was transporting people who had been deported from Algeria to the border of Niger and who were on their way to be brought to the city of Agadez.

According to Aïr Infos, reasons to blame for this tragic deadly accident are both the degraded conditions of the road that leads from Agadez to Arlit and further to the Algerian border, but also drivers driving too fast, thus risking the lives of passengers.

Moreover, this tragic case points out the reality that the lives of migrants and refugees who have just survived the long, harmful, violent and dangerous deportation trip from Algerian cities up to the desert zone at the border of Algeria and Niger continue to be under threat.

Instead of being pushed around under abusive, harmful and dangerous conditions, refugees and migrants must have the right to arrive and stay where their lives are safe.

Posted on Nov 10 | Tagged Arlit, accident, deportation, epulsion, Niger, Algerie, and algeria | visited: 5244
Posts
Latest news Analyses & statements Activities of APS
Latest posts
2022-10-21 October 2022: Deportations from Algeria to Niger continue - assistance to deportees by Alarme Phone Sahara's tricycle (Activity, News) 2022-09-19 More mass deportations from Algeria to Niger in August and September 2022 (News) 2022-09-19 "It's too hard, we want to go back": Senegalese in Niger denounce the difficult wait for their repatriation (News, Statements) 2022-09-22 Niger: Senegalese migrants take to the streets to march from Agadez to Niamey and demand their return to Senegal (News) 2022-08-28 Niger: Protests of migrants in IOM camps in Agadez and Arlit (News) 2022-08-27 IOM in Niger: Criticism of serious shortcomings in the care of people stranded in Niger (Statements, News) 2022-08-23 Solidarity video for Sierra Leonean refugee protest camp in Munich (Statements, Activity)