The year 2021, marked by thousands of deportations from Algeria to Niger every month, ended with the tragic death of a Sudanese citizen who died at "point zero" in the desert area of the Algerian-Nigerian border near the town of Assamaka. According to the whistleblowers of Alarme Phone Sahara, the deceased had arrived at "point zero" on 8th of December with an unofficial deportation convoy. 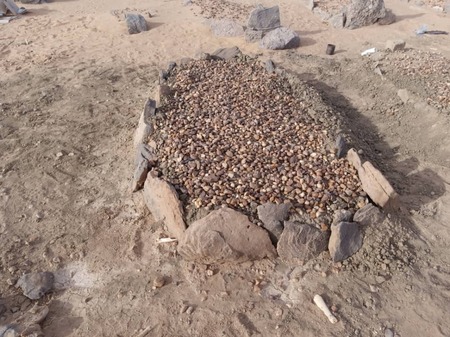 Grave of a Sudanese man who died at "point zero" / Assamaka

on 8th of December 2021 after a deportation convoy

The exact identity and circumstances of the Sudanese man's death have yet to be clarified. However, it can be assumed that the inhumane and violent conditions in which arrested migrants are detained in Algerian prisons, transported over long distances across the desert to the Nigerian border and finally abandoned in the middle of the desert in a starved and dehydrated state, are directly responsible for the man's death.

Regularly, people from "unofficial" expulsion convoys are left in the border area between Algeria and Niger, in the middle of the desert. The deportees have to walk between 15 and 20 kilometres through the desert to reach Assamaka, the first Nigerien town after the Algerian border. With this practice, Algerian security forces always put the lives of deportees at risk and it is feared that many more will not make it if they get lost in the desert.


Unofficial deportation convoys on 8th and 21st of December 2021

According to observations by Alarme Phone Sahara whistleblowers, 790 people deported from Algeria in an "unofficial" deportation convoy arrived on foot at the Assamaka border post on 8th of December 2021 after Algerian forces had dropped them off in the desert at "point zero", where a Sudanese man tragically died. 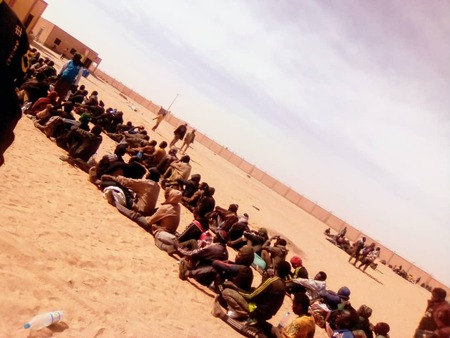 In this group were 6 minor boys and 4 women. The largest groups of deportees were the Malian nationals, numbering 190, the Guinean Conakry nationals, numbering 269, and 120 Sudanese people. Besides them, there were also nationals from many other sub-Saharan African countries: 26 from Togo, 14 from Sierra Leone, 39 from Ivory Coast, 16 from Cameroon, 29 from Benin, 12 from Senegal, 36 from Burkina Faso, 7 from Nigeria, 3 from Ghana, 10 from Chad, 18 from the Gambia and one person from Liberia.

Another 603 deportees in an "unofficial" convoy, including two women, arrived on foot at Assamaka on 21st of December 2021. The largest groups this time were 207 Malians, 197 nationals of Guinea Conakry and 61 people from Sudan. Apart from them, 10 people from Sierra Leone, 22 from Ivory Coast, 19 from Cameroon, 10 from Benin, 34 from Burkina Faso, 11 from Nigeria, 9 from Chad, 10 from the Gambia, 5 from Congo, two from Ghana, two from Liberia, one person from Senegal, one from Guinea Bissau, one from Eritrea, and one person from Togo were in the convoy.


Official deportation convoys on 10th and 23rd of December 2021

According to the whistleblowers of Alarme Phone Sahara, 1067 people deported from Algeria to Niger in a large official convoy arrived at Assamaka on 10th of December 2021. Among them were 89 minor girls, 70 women, 95 minor boys and 813 men.

Again, the high figures of 184 and 175 minor children among the deportees are worrying, given that cases of child abuse and separation of children from their parents are regularly reported in the deportation convoys from Algeria to Niger.


The Algerian state and its policy of hunting migrants

The year 2021 ends with a sad and revolting record of violent, extra-legal and in the worst cases murderous deportations from Algeria to Niger.

In fact, for years there have been several phases of mass deportations from Algeria to Niger and Mali. The waves of roundups, arrests and deportations since September 2020 are a direct result of the "migration reform" and the creation of an inter-ministerial commission to combat "irregular migration", announced by Algerian Interior Minister Kamel Beldjoud during a plenary session of parliament on 30th of September 2020.

The "complementary measures" announced by the minister include mixed police and gendarmerie checkpoints on border roads, the demolition of "anarchic dwellings" housing migrants, such as sheds or construction sites, the dismantling of migrant reception networks and the automatic confiscation of means of transport.

On the one hand, this kind of declaration of war against migrants in Algeria follows the interest of the Algerian authorities to reduce the number of migrants and to satisfy the racism within their own society. On the other hand, it is a chance for them to position themselves as guardians for the border regime of the EU states. Although the Algerian state has so far refused to sign a formal migration agreement with the EU countries, its ruthless deportation policy serves it as an asset in negotiations with European states on credits and economic cooperation.

In addition, collaboration already exists in the form of deliveries of large quantities of military and security goods for the Algerian army, police and gendarmerie, such as surveillance technology or Mercedes-Benz vehicles.

Official deportations from Algeria to Niger take place on the basis of a bilateral agreement signed in 2014 for the deportation of Niger nationals, many of whom live in Algeria in a context of often seasonal migration. However, the Algerian state also takes advantage of this to deport numerous nationals from other countries, especially from Sub-Saharan Africa, in "unofficial" convoys, and so far the Niger authorities lack the power or the will to stop this practice.

The deportations from Algeria to Niger and the human rights violations by Algerian security forces should also be seen in the context of the policy of externalisation of borders by EU countries, which have agreements with Niger to help close migration routes and which also collaborate with Algeria, among other things in the form of the delivery of large capacities of military vehicles and "security" technology.


Faced with this record for the year 2021, Alarme Phone Sahara demands:

⦁ To shed light on the circumstances of the death of the Sudanese man who arrived on 8th of December 2021 by an unofficial deportation convoy at "point zero" near the Algerian-Nigerian border, where he died in the desert.

⦁ Alarme Phone Sahara continues to demand truth and clarification from the Algerian state about what really happened in the deportation convoys that left Algiers on 12th and 25th of March 2021, especially if it is true that people were killed in bus accidents.

⦁ An immediate halt to deportations and pushbacks of refugees and migrants from Algeria to Niger and other neighbouring countries.

⦁ The cancellation of the deportation agreement between Algeria and Niger.

⦁ An end to acts of theft and violence by Algerian security forces against migrants and refugees.

⦁ The commitment of the state of Niger to defend its citizens who suffer persecution, human rights violations and deportations in Algeria.

⦁ Algeria and Niger must stop collaborating with the policies of outsourcing European borders on African soil and taking military and security materials to use against the migrant population.