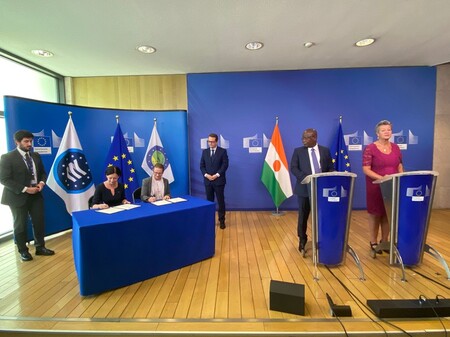 It‘s the first time such an „operational partnership“ was signed by the Frontex EU border agency since its creation. It can be assumed that this „working arrangement“ will increase the influence and power of Frontex in Niger, where it has been represented so far by the presence of a Frontex Liaison Officer, but not played a visible major role.

This takes place at a time where, on the other hand, the presence of foreign powers and their military forces is met by growing outrage within the Nigerien population.

One concrete aim of the „operational partnership“ is strengthening the already existing joint investigation teams, composed of officials from EU member states and Niger and funded by the EU to „disrupt“ the businesses of „migrant smuggling“ and of human trafficking.

It is likely that such moves will boost again efforts of criminalisation against many kinds of businesses and activities connected to the passage and presence of migrants and refugees in Niger and that the already existing „anti-smuggling“ law 036-2015 will play a crucial role in these efforts.

This happens at a time where the law 036-2015 has come under large criticism by various actors of Niger’s civil society and several organisations including Alarme Phone Sahara are preparing a lawsuit against this law at the ECOWAS court.

The basic problems with the 036-2015 law and Niger’s anti smuggling policy implemented through the influence of EU states are: 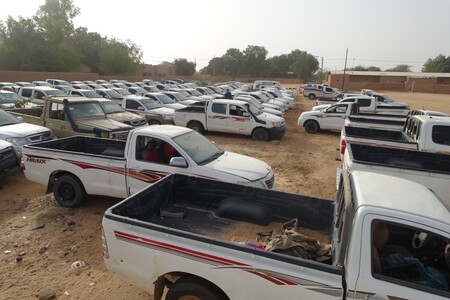 Instead of taking the problems with EU imposed anti-smuggling policies of the last years into account, the new Frontex and EUCAP Sahel Niger „operational partnership“ only seems to aim at perpetuating and intensifying these same harmful policies.

Stepping up control along Niger’s borders with Libya and Algeria

Another focus of Frontex’s and EUCAP Sahel‘s new „operational partnership against migrant smuggling“ is providing closer technical and operational support to Niger for „managing“ its southern and northern borders, especially facilitating and stepping up border patrol actions along Niger‘s borders with Libya and Algeria. According to a an action file issued already on 8th of February 2022, this means, among other things, support for Niger’s „Mobile Border Control Companies“ (Compagnies Mobiles de Contrôle des Frontières). Frontex activities in Niger are also supposed to facilitate border control actions in the south of Libya in cooperation with EU‘s EUBAM Libya mission and supported by Italy and the IOM. The handling of forced returns, i.e. deportations and pushbacks, from Algeria shall also be taken into consideration. 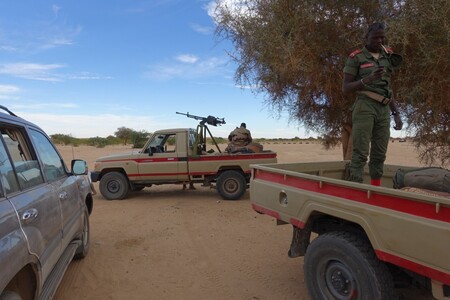 The plan to facilitate and step up patrols and other control activities in the border zones between Niger, Libya and Algeria through the „operational partnership“ between Frontex and EUCAP Sahel Niger is a continuation of the same policy that the EU states have been pushing in Niger for years. Many millions of Euro have been invested in providing vehicules and other technical equipment for Niger’s security forces and increasing theirs capacities to patrol and control traveling routes and border zones. For migrants and refugees moving through the vast desert zones of Northern Niger, this has not improved their safety, but created new life-threatening risks.

The criminalisation of the transport of migrants, especially from Agadez towards the Libyan and Algerian borders, combined with the increased presence of patrols and checkpoints along the known travel routes, has led to drivers switching to remote, undesignated and therefore particularly dangerous routes.

Unlike in the past, it is no longer possible for many people to cross the desert in large, officially registered convoys. Instead, they have to squeeze into the backs of individually travelling pickup trucks, whose drivers avoid detection at all costs. This also encourages life-threatening situations where drivers flee in panic from a patrol or checkpoint, leaving travellers behind in the desert.

Many people have died under these conditions in recent years, as evidenced by the graves of migrants buried in the Kaouar Desert found by Alarme Phone Sahara whistleblowers and other human rights activists. Under the difficult conditions on the desert, it has not been possible so far to detect their exact number.

Migrants' graves in the zone of Latai, North of Niger

It is to be feared that the „working arrangement“ between Frontex and EUCAP Sahel Niger will reproduce and exacerbate exactly the same life-threatening and often deadly conditions.

Since the existence of the EU border agency Frontex, its powers and responsibilities have been constantly expanded. As pointed out in the campaign call „Abolish Frontex“, Frontex is the personification of the EU’s repressive migration and border policies. The agency plays a leading role in EU border security and control work, deportations, cooperation with third countries and contacts with the military and security industry.

As documented by several cases in the Aegean Sea between Greece and Turkey or from the border between Poland and Belarus, Frontex systematically engages in extralegal pushbacks. In the Central Mediterranean, Frontex collaborates with the so-called Libyan coast guard intercepting migrant's boats to bring them back to Libyan prison camps. In other cases, people in distress at sea were spotted by Frontex drones, but no help was sent.

Despite these scandalous machinations, the annual EU budget for Frontex is increased year after year, from 6 million Euros in 2005 to 754 Euros in 2022.

Now, Frontex has signed its „operational partnership“ with EUCAP Sahel Niger. At the same time, it is increasing its presence in Mauritania and Senegal by installing a "risk analysis cell" in Nouakchott, Mauritania, planned to open in autumn 2022, and by deploying vessels, surveillance equipment, and carrying out operational tasks, all with the aim to fight against „irregular immigration“, as detailed in two action files issued on 7th of June 2022.

In light of past human rights violations involving Frontex, the growing presence and influence of Frontex on the African continent is an additional threat to the security and rights of migrants, refugees and people considered potential migrants.

At the signing of the agreement between Frontex and EUCAP Sahel Niger on 15th of July 2022, Nigerien Interior Minister Hamadou Amadou Souley pointed out:

"All these migrants are asking for is to live with dignity, to be treated as human beings. This is what Niger is trying to offer them as an opportunity. That's why we open our borders to these migrants and we try to accompany them."

To achieve a policy in favour of the rights and dignity of migrants and refugees, the republic of Niger should somehow pursue other paths than cooperating with Frontex and its repressive border regime notoriously violating human rights. 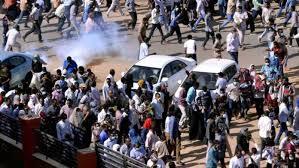 While the EU border agency Frontex is searching to increase its influence and power in Niger, other European forces in the Sahel country are met with growing unrest and outrage from Nigerien civil society: On 3rd of August, celebrated as Niger’s independence day, protests started against the presence of foreign military forces, especially French led operation Barkhane, which has been accused of multiple assassinations of civilians and is seen as a force of neocolonial dominance by many people. At the same time, the protests are directed against the massively rising prices for fuel and food, which threaten the livelihoods of many people who are already living at a minimum subsistance level. Civil society organisations launched the „movement M62“ as a platform of protest.

All this points to the need for policies that put the interests and living conditions of African populations first and do not submit to the dictates of European security and migration control policies.

Posted on Aug 17 | Tagged Frontex, Niger, accord, agreement, partnership, partenariat, droits humains, human rights, algeria, algérie, Libya, and Libye | visited: 2636
Posts
Latest news Analyses & statements Activities of APS
Latest posts
2022-12-04 Niger end 2022: Humanitarian emergency in the face of mass deportations and inaccessibility to IOM services (News) 2022-10-21 October 2022: Deportations from Algeria to Niger continue - assistance to deportees by Alarme Phone Sahara's tricycle (Activity, News) 2022-09-19 More mass deportations from Algeria to Niger in August and September 2022 (News) 2022-09-19 "It's too hard, we want to go back": Senegalese in Niger denounce the difficult wait for their repatriation (Statements, News) 2022-09-22 Niger: Senegalese migrants take to the streets to march from Agadez to Niamey and demand their return to Senegal (News) 2022-08-28 Niger: Protests of migrants in IOM camps in Agadez and Arlit (News) 2022-08-27 IOM in Niger: Criticism of serious shortcomings in the care of people stranded in Niger (News, Statements)