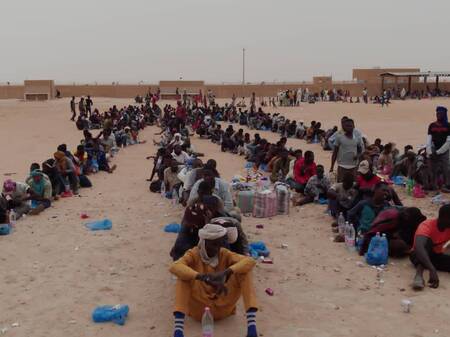 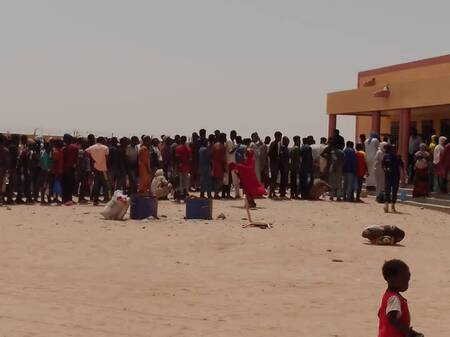 Left in the desert. The unofficial deportations convoys of 14th of August, 2nd September and 17th of September 2022

The people deported in the "unofficial" convoys, mostly not Nigeriens, but nationals of other countries, are always left at "Point Zero" in the border area between Algeria and Niger, in the middle of the desert. The deportees have to walk 15 kilometres through the desert to reach Assamaka, the first Nigerien town after the Algerian border. With this practice, Algerian security forces always put the lives of deportees at risk.

According to descriptions of deportees and drivers, transport in unofficial deportation convoys takes place under very harsh and violent conditions:

From Tamanrasset to Point Zero on the border with Niger, people are loaded into trucks where they have to stay in the back of the truck for hours, squeezed together, with no opportunity to sit properly, with very few breaks, with insufficient food and water supplies, and no possibility of going to the toilet. Violence by security forces is common in detention centres and also during transport.

14th of August 2022: 730 deportees in an unofficial expulsion convoy, among them 13 women, 10 minor boys, 2 minor girls and 705 men, arrived in Assamaka on foot, after Algerian forces had dropped them off at Point Zero 15km from Assamaka.

Once again, the largest groups of deportees were 220 Guineans and 255 Malians. Among them were 9 nationals from Chad, 27 from Gambia, 40 from Sudan, 23 from Burkina Faso, 45 from Ivory Coast, 21 from Senegal, 21 from Cameroon, 12 from Benin, 17 from Nigeria, 17 from Sierra Leone, 2 from Niger itself, 2 from Togo, 9 people from Liberia, 3 from Guinea Bissau and one from Ghana.

In addition, and very unusual for previous years' experiences, there were 4 Egyptians and 3 Yemenis who could not stay on Niger territory, but were sent back to Algeria by the Niger border police.

The largest groups of deportees were again 230 Guineans and 257 Malians. Besides them, there were 66 nationals from Chad, 28 from Gambia, 84 from Sudan, 16 from Burkina Faso, 27 from Ivory Coast, 6 from Senegal, 11 from Cameroon, 27 from Benin, 4 from Nigeria, 11 from Sierra Leone, 3 from Liberia and one from Ghana.

According to the whistleblowers of Alarme Phone Sahara, it is still possible that the real number of deported people is quite higher than those who were registered in Assamaka.

The largest groups of deportees were again 166 Guineans and 286 Malians.

Besides them were 6 nationals from Chad, 21 from Gambia, 21 from Sudan, 37 from Burkina Faso, 22 from Ivory Coast, 27 from Senegal, 25 from Benin, 19 from Nigeria, 14 from Cameroon, 14 from Sierra Leone, 3 from Liberia, 4 from Togo and 2 from Niger, one person from Guinea Bissau and one from Mauritania.

The official deportation convoys take place on the base of a deportation agreement between Algeria and Niger signed in 2014. The people deported in these convoys are generally citizens of Niger. Unlike the unofficial convoys, these people are taken directly to the city of Agadez or Arlit.

04th of September 2022: Arrival of an official deportation convoy of 16 trucks with 822 persons. 798 were Nigerien citizens, including 63 women, 65 minor girls, 90 minor boys and 580 men. In addition, 24 nationals of other countries were deported in the same convoy: 11 people from Nigeria, 3 from Cameroon, 9 from Mali and one person from Ivory Coast.

Systematic disregard for the rights of children and minors

The figures show, among other things, that there were at least 569 minor girls and boys deported from Algeria to Niger during the two months of August and September 2022; the vast majority of these young people are Nigerien citizens deported in official convoys. This very high figure is again worrying, given that cases of abuse and separation of children from their parents are regularly reported in deportation convoys from Algeria to Niger. In the deportation practices of the Algerian state, disregard for the rights of children and the particular vulnerability of children and minors is systematic.

Assistance to deportees with the Alarme Phone Sahara tricycle

During deportation convoys from Algeria, deportees are transported for days, crammed into buses and the back of trucks, in the heat and cold, through the desert. Those deported by unofficial convoys and abandoned in the desert in the border area have to walk 15 km to Assamaka on the Niger side. Regularly, people are brutally abused by Algerian security forces. Many deportees therefore arrive in Assamaka ill and injured.

In case of need, the Alarme Phone Sahara team in Assamaka transports these sick and injured deportees from the police station to the local health centre, with the permission of the police officer in charge.

Stranded in Niger at a time of deepening misery

According to reports from Alarme Phone Sahara's whistleblowers, conditions for deportees and the migrant population have worsened in all the different towns in northern Niger in the face of a general situation of aggravated misery triggered by, among other things, shortages and a massive increase in the price of food on the world market. In this precarious survival situation, thousands of people, often victims of deportation or forced return from Algeria or Libya, remain stranded in Niger with no means to continue their migration project or to return to their countries of origin.

Posted on Sep 19 | Tagged expulsion, deportation, pushback, refoulement, Assamaka, Niger, Algerie, algeria, migrant.e.s, and migrants | visited: 1921
Posts
Latest news Analyses & statements Activities of APS
Latest posts
2022-12-04 Niger end 2022: Humanitarian emergency in the face of mass deportations and inaccessibility to IOM services (News) 2022-10-21 October 2022: Deportations from Algeria to Niger continue - assistance to deportees by Alarme Phone Sahara's tricycle (Activity, News) 2022-09-19 More mass deportations from Algeria to Niger in August and September 2022 (News) 2022-09-19 "It's too hard, we want to go back": Senegalese in Niger denounce the difficult wait for their repatriation (Statements, News) 2022-09-22 Niger: Senegalese migrants take to the streets to march from Agadez to Niamey and demand their return to Senegal (News) 2022-08-28 Niger: Protests of migrants in IOM camps in Agadez and Arlit (News) 2022-08-27 IOM in Niger: Criticism of serious shortcomings in the care of people stranded in Niger (News, Statements)