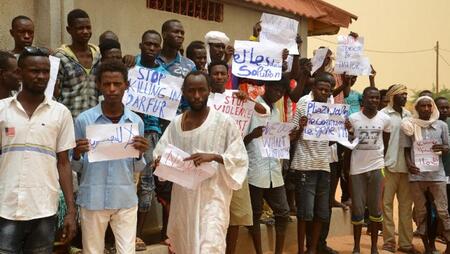 According to a report on RFI (Radio France Internationale), Sudanese refugees, who are blocked in the desert of Agadez in a camp run by UNHCR, are protesting against their situation. According to RFI, they are demanding an acceleration of the treatment of their asylum appllications.

It is a worrying situation to see that RFI is spreading a perspective focussed on statements of the authorities of Niger who are trying to blame refugee's protest as "violent" and "intolerable".

It would be somehow important to consider the reality in which these refugees are stuck and which makes them protest:

Many of the Sudanese refugees have been blocked in Niger for one year and 3 months, without any advancement of their asylum trials.

Almost all Sudanese in Agadez are people from Darfur region who survived the war and afterwards had gone to Libya to search for safety and work, but the horrible situation in Libya made them flee to Niger republic.

And it is legitimate that refugees demand a solution and a future, instead of being stuck in the desert!