September and October 2019: Massive deportations from Algeria to Niger

Deportation convoys in September and October 2019

For the months of September and October 2019, Alarme Phone Sahara's whistleblowers in the Agadez region of Niger reported a large-scale continuation of deportations of citizens of different nationalities from Algeria to Niger.

According to Ibrahim François, based in Ingall, and Mohamed Souleymane, based in Assamaka, the deportation of 3231 people across the border in Assamaka was confirmed for the days between 23 September and 20 October 2019. 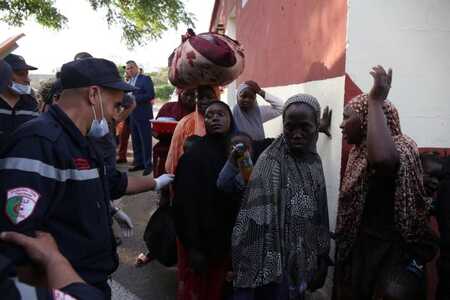 There were convoys that carried exclusively groups of people from Niger and others with citizens of various origins.

It was remarkable that among the deported non-Nigeriens, by far the largest groups were the citizens of Mali and Guinea Conakry. There were also nationals from other countries in the sub-region, including the Gambia, Burkina Faso, Benin, Sierra Leone, Côte d'Ivoire and Senegal, Central African countries, especially Cameroon, and even some people from Sudan and Somalia.

Deportees are usually transported in bus and truck convoys to the border area near the Assamaka border crossing by Algerian law enforcement forces. They leave them in the desert to walk, already weakened, the last 15 to 20 kilometres on foot, risking collapse or getting lost. According to available evidence, IOM sometimes searches for deported people up till where they have been abandoned, but not in a reliable way.

On 15th of October 2019, the International Organization for Migration (IOM), according to its own publication, carried out, in close collaboration with the governments of Algeria and Niger, its first "humanitarian charter" flight of so-called "voluntary return", carrying 166 Nigerien citizens from Tamanrasset to Niamey. IOM is helping the Algerian state's policy of violent deportations by facilitating the deportation of vulnerable people with so-called "humanitarian flights".

Deportations from Algeria in an international framework

The institutional base for mass deportations from Algeria to Niger has been a bilateral agreement since 2014. The victims of this collaboration are, on the one hand, Nigerien citizens who had been migrating to their neighbouring country for a long time, often seasonally, in search of work and sources of income. On the other hand, the targeted persons are nationals of various African countries who are increasingly blocked in Algeria since recent years. Reasons are the war and the hunt on migrants in Libya, the closure of the Moroccan border and in general all the practices that seek to block migratory routes to Europe. The Algerian state, on the one hand, pursues its own interest in showing a tough and ruthless policy against refugees and migrants and in satisfying racism within its own society. At the same time, it also seeks to position itself as a reliable partner for the border regime of the European Union states. With them, it does not maintain a formal migration control agreement, but still receives large quantities of military and security material, such as surveillance technologies or vehicles from the German car manufacturer Mercedes-Benz.

No to the ongoing tragedy of deportations from Algeria to Niger

It is obvious: With the deportations from Algeria to Niger, there is a continuous drama of human rights violations against migrants and refugees. A tragedy that causes deaths, injuries and trauma. A tragedy that is encouraged and orchestrated by European policy, which seeks to externalise its border regime throughout the Sahel-Saharan region.

Alarme Phone Sahara calls on civil societies in the countries involved and concerned to resist deportations and pushbacks and to defend the lives, rights and freedom of movement of migrants and refugees.

Alarme Phone Sahara also calls on the governments and parliaments of all the countries concerned, such as Mali and Guinea, to come for urgent support for their fellow citizens and to speak out against the massive deportations from Algeria to Niger.

The figures on deportations from Algeria to Niger through Assamaka between 23rd of September and 20th of October 2019 according to Ibrahim François and Mohamed Souleymane, Alarm Phone Sahara alert launchers:

316 persons deported, including at least 3 women and 2 underage boys

465 persons deported, including at least 12 women and one minor boy

572 persons deported, including at least 20 women and 8 underage boys

507 persons deported, including at least 9 women and 2 underage girls

Caméroune 26, including 6 women and one female minor

Posted on Nov 10 | Tagged deportation, expulsion, pushback, Assamaka, Niger, algérie, and algeria | visited: 6074
Posts
Latest news Analyses & statements Activities of APS
Latest posts
2022-12-04 Niger end 2022: Humanitarian emergency in the face of mass deportations and inaccessibility to IOM services (News) 2022-10-21 October 2022: Deportations from Algeria to Niger continue - assistance to deportees by Alarme Phone Sahara's tricycle (Activity, News) 2022-09-19 More mass deportations from Algeria to Niger in August and September 2022 (News) 2022-09-19 "It's too hard, we want to go back": Senegalese in Niger denounce the difficult wait for their repatriation (Statements, News) 2022-09-22 Niger: Senegalese migrants take to the streets to march from Agadez to Niamey and demand their return to Senegal (News) 2022-08-28 Niger: Protests of migrants in IOM camps in Agadez and Arlit (News) 2022-08-27 IOM in Niger: Criticism of serious shortcomings in the care of people stranded in Niger (News, Statements)