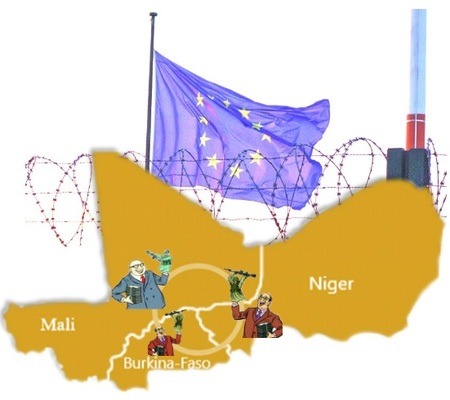 This is the zone where "the populations are in total destitution, with displaced people, where the social needs are enormous. This programme that we have launched aims to provide these populations with health centres, schools and, most importantly, water points," Mikailou Sidibé, head of the G5 Sahel's infrastructure department, told RFI. Sidibé is referring to funding from the German government, which, within the framework of the G5 Sahel (a joint force of military personnel from Mauritania, Mali, Burkina Faso, Niger and Chad), will give priority to populations that are victims of terrorism. The area chosen is that of Liptako-Gourma, known as the 'three borders': Burkina-Mali-Niger, where the presence of terrorist groups accentuates poverty and insecurity. However, if you look closely, the three borders are infact something else !

The first one is that of military-humanitarian hypocrisy. It consists, as in the script of a film already seen elsewhere, in preparing the ground for the creation of chaos, facilitating its maintenance and managing, through the expected funding, to present themselves as the "saviours of the fatherland". Drivers and firefighters as the circumstances dictate in order to 'attract funds' for development projects. Just like the armed terrorist Groups and the armed forces, composed of local and foreign military. Trade, arms and resource geopolitics intertwine to form a single front: As long as there is war, there will be a future for the war-makers.

A similar process is taking place in the field of migration. Before, Europe's external borders were created in the Sahel, prohibiting 'manu militari' the free mobility of migrants and, in exchange, biased development projects were imposed, called 'Trust Funds', which would have the ambition to reach the 'deep roots of migration'. The logic is the same, they simply change the sector of intervention, the actors and the implementation mechanisms. Firstly, with the invention and export of a single idea of a border. This is followed by training and border management mechanisms, for example through EUCAP Sahel (a civilian mission to support internal security capacities), the International Organisation for Migration (IOM), to repatriate 'voluntary' migrants, and finally the humanitarian world. The latter, of course, thanks to external funding, heals the 'wounds' of vulnerable migrants. All this without questioning the system that generates it. So this is the second border of the Sahel!

The third border, on the other hand, is more like an abyss that separates the world from one end to the other. An abyss which, as in the parable of the rich man who gives banquets every day to his friends in his palace and the poor Lazarus who, invisible to his eyes, remains at the door hoping to feed on everything that falls from the rich man's table. The chasm exists and is widened by the globalisation of the invisibility of the 'poor Lazarus' today who, unknowingly, represent the only hope for change in the world. The abyss between the North and the South is not only found between continents, but it is reproduced within countries, cities and countryside. It is also found between the different generations and above all in the deepest part of the human spirit, called 'heart'. This last border, the 'abyss', is the one that lies at the base of the other two mentioned above. It manifests itself externally in walls, barbed wire, detention camps, relocated cemeteries and the confinement of 'useless' peoples.

This is why the 'guardians of the roots' and the builders of bridges are considered dangerous by the system that creates the abyss. Yet it is only through them that the fourth border called 'utopia' can germinate.