Genesis of a journey

A group of young Guineans will long remember their experiences during their migration. Like many young sub-Saharans, 16 of Guinean nationality were inside the violent and illegal waves of deportations from Algeria to Niger, despite Algeria's commitment to the Geneva Convention on Refugee Status and its ratification of the African Charter on Human and Peoples' Rights, which prohibits, in Article 12, any deportation targeting national, racial, ethnic or religious groups. In 2020, despite the imposition of the Corona crisis on the states closing their borders, Algeria deported more than 24,000 sub-Saharans, and from January to August 2021 more than 15,000. The International Organization of Migration (IOM), through its "Assisted Voluntary Return and Reintegration (AVRR)" programme, has been receiving them from the Nigerian-Algerian border to Agadez, in its transit centre, with a view to transporting them to their countries of origin.

The beginning of another ordeal

After the trauma of deportation, during their stay in the transit camp which lasted 3 to 4 months, some of the 16 Guineans were tested positive for COVID-19 and were therefore interned in the regional hospital of Agadez for treatment and quarantine observation. This is in line with the management of cases of Covid-19 patients and their contacts. So, after treatment and quarantine observation, the following tests proved negative, and the young people expressed their desire to join their group in the organisation's centre, knowing that a wave of departures was planned at this time. With no response to their request and faced with the contempt of which they are victims, some of them reacted by carrying out an act that can be described as vandalism, not really to destroy public property, but rather to make themselves heard, as this was probably the only option for them to be heard. Indeed, this demonstration was successful because immediately those in charge of the health centre and the IOM showed up, as well as the local authorities. But unfortunately, this was misinterpreted by the officials. As a result, the entire group of 16 was expelled from the health centre and refused access to the IOM camp, leaving them homeless in the streets of Agadez in the rainy season and without assistance.

Informed of the situation, the transnational network "APS" plays the role of the good contact point. Video testimonies were published of the experiences of these travellers. The concern was to alert public opinion and to find a solution to facilitate the return of these young people to their home country. Unfortunately, this did not produce the expected results, so the young people continued to wander around the city of Agadez. Because of the fundamental principle of APS, not to encourage departures but also not to discourage candidates for migration, but just to give the human being its value and its right regardless of his or her situation, and because of the lack of capacity to accommodate them, APS admitted them to the weekly collective kitchen it organises for migrants in its premises. In addition, they benefit from the monthly food assistance that APS always offers to migrant communities stranded in Agadez.

Conditional readmission to the camp

After several attempts at mediation between the young people and the camp officials, the compromise was to require the young people to send letters of apology to IOM and hospital officials. They agreed to do this and did so. Faced with the delay in response, four of them, thinking that they were at the root of this situation, decided to leave the group and continue their journey at their own risk. This "half and half" situation reveals a sort of contradiction in the mission of the IOM, which proclaimed to anyone who would listen to them the principle of assistance to migrants who voluntarily wish to return to their country of origin. 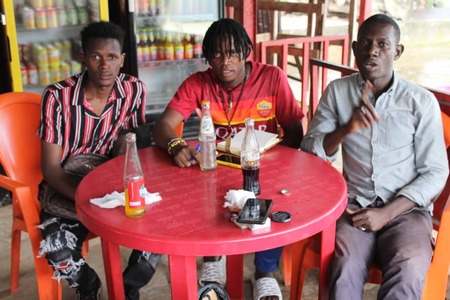 Human mobility being normal and natural, a member of the APS coordination who was in Conakry during these moments took steps to see to what extent a solution could be found for these young people from their country of origin. This was unsuccessful and obliged the activist to go to IOM Guinea on 27th of July to find out if they were aware of the situation, or to alert them in order to make them react. What came out of the interview seemed to affirm that the IOM branch in their country of origin was not aware of the situation. But the delicacy of the situation, supported by the videos shared with them, aroused the interest of the organisation and they promised to contact their colleagues in Niger to find out more. A week later, in a second interview, IOM Guinea informed them that some of their staff were currently in Niger and that they would try to find a solution.

On 19th of August 2021, a flight chartered by IOM flew 125 Guineans from Agadez to Conakry, including the 12 who had fallen out with the organisation. A communication with the APS coordination reassures that these 12 have arrived at Conakry's Gbessia International Airport. But the worst thing is that upon their arrival, a call was made in the airport hall to say that these 12 young people were not included in the UN agency's social reintegration programme. Normally, on arrival in Conakry, each migrant is given the sum of 500,000 FGN (43 €), a mobile phone to contact his or her family and a numbered card for further assistance. In fact, the 12 young people mentioned here only received the money but no phone or card, which really confirms their exclusion from the reintegration programme. However, the APS representative in Guinea had a discussion session with three of them in Conakry to better understand their situation and to help them take steps to regain their rights.

However, a question remains unanswered about the conditions of socio-economic reintegration of these migrants who have accepted against their will to return home after having lost everything due to the ups and downs of their movements through villages, towns, borders and countries. Restricting freedom of movement to people seeking better living conditions and excluding them from the possibility of benefiting from the reintegration fund, makes the IOM's policy of "voluntary return" seem like a one-size-fits-all option that offers no other choice despite the violence endured along the way.

Freedom of movement put to the test

The experience of the Guinean 16 reopens the debate on the role of international bodies and states with regard to the fundamental rights of individuals, particularly that of freedom of movement. Here the most visible part of the infringement of this right is already the conditioning of the assistance of the international organisation in charge of migration to the acceptance to return to their country of origin without consideration of the situations prevailing there. In specific cases, the assistance programme known as Assisted Voluntary Return and Reintegration (AVRR), where the 'voluntary' nature of the programme is questionable, is it not becoming merely a transport programme for others?

APS remains committed to the principle of promoting people's rights. Our network is convinced that the IOM does not pay due attention to migrants. On the contrary, it likes to assert its tracking logic by playing the role of policeman in the service of the European Union (EU), as can be seen in many cases where travellers are subjected to the diktat of outsourcing policies around the world.

APS supports freedom of movement for everyone who wants it. This is an opportunity to call on all humanitarian organisations to work for the cause for which they were created.

APS remains convinced that respect for circular migration is a solution to be favoured over the closing of borders imposed by the European Union (EU) and its henchmen. Decisions are blindly implemented by leaders of certain states whose aim is to perch at the top of power and unashamedly observe the social inequalities that prevail there. A re-reading of international law can serve to reframe the thinking of leaders in the South as well as in the North. APS does not encourage risky travel, but it is committed to the removal of barriers that restrict the movement of people if no practical steps are taken to eradicate the causes of migration, which are no longer a secret to anyone.