Night from 1st to 2nd of May 2019: Wave of pushbacks from Algeria to Niger

Death in the cold at the Moroccan-Algerian border!

At least 8 migrants died in the border region between Algeria and Morocco between December 2018 and 5th of February 2019. 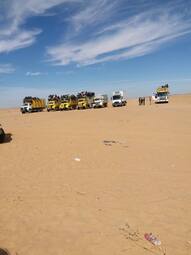 Migrants and refugees pushed back from Algeria to the desert

Migrants band refugees pushed back from Algeria to the desert in the border region between Algeria and Niger republic, near the border town of Assamakah. 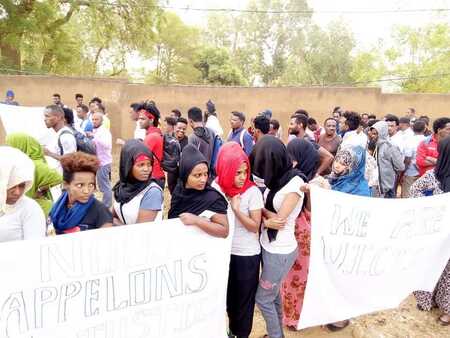 Demo in Niamey by refugees blocked in Niger

"We ask again and again UNHR about our case, but no solution."

At 6 o' clock in the morning of 11th of March, Morrocan authorities carried out house raids in the city of Oujda in neigbourhoods where migrants are living.

According to the authorities, 81 migrants, called "candidates for clandestine migration" are in custody at the police station of Oujda. The people concerned are from different countries of subsaharean Africa, among them, according to the authorities, 26 women and 7 minors. Among others, there is one anglophone family - a woman and a man with their two kids. There are also people who have been arrested although they have residency cards in Morocco.

According to a report on RFI (Radio France Internationale), Sudanese refugees, who are blocked in the desert of Agadez in a camp run by UNHCR, are protesting against their situation. According to RFI, they are demanding an acceleration of the treatment of their asylum appllications.

Posted on Mar 12 | visited: 3650
« 1 2 3 4 5 6 7 8 »
Posts
Latest news Analyses & statements Activities of APS
Latest posts
2022-12-04 Niger end 2022: Humanitarian emergency in the face of mass deportations and inaccessibility to IOM services (News) 2022-10-21 October 2022: Deportations from Algeria to Niger continue - assistance to deportees by Alarme Phone Sahara's tricycle (News, Activity) 2022-09-19 More mass deportations from Algeria to Niger in August and September 2022 (News) 2022-09-19 "It's too hard, we want to go back": Senegalese in Niger denounce the difficult wait for their repatriation (News, Statements) 2022-09-22 Niger: Senegalese migrants take to the streets to march from Agadez to Niamey and demand their return to Senegal (News) 2022-08-28 Niger: Protests of migrants in IOM camps in Agadez and Arlit (News) 2022-08-27 IOM in Niger: Criticism of serious shortcomings in the care of people stranded in Niger (Statements, News)