In Arlit, according to IOM figures, around 640 people, mostly migrants deported from Algeria, are currently stranded in the IOM transit camp. On 20th of April, people protested and revolted against the unbearable conditions in which they are currently living. 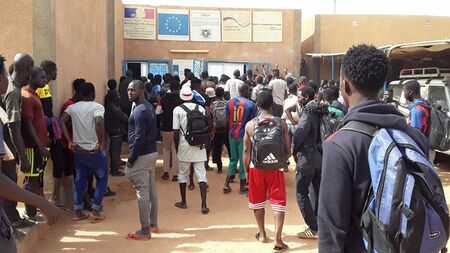 According to one of the migrants interviewed by journalist Fatma Ben Hamad for "Obesrvateurs France 24", their protest and revolt was due to the lack of dialogue with IOM officials, who manage the Arlit camp.

According to the man interviewed by "Obesrvateurs France 24", the living conditions in the IOM camp are also unbearable: When they arrived from Assamaka, the migrants had no drinking water or mattresses and only four tents for more than 900 people. In addition, they had not received hygiene kits with soaps and towels, which is why upset people forced their way into IOM shops during their revolt to get the necessary supplies.

According to "Obesrvateurs France 24", the police reacted with repression: Tear gas was fired at the migrants, at least 13 people were arrested and taken to the police station, where they were still on 24th of April.